Figure 1 shows how little the number of undernourished people has changed in recent decades. Considering that the world population has risen by 2.3 billion since 1990, it is clear that we now feed 2.5 billion more people than we did then, most of this progress has been literally eaten up by population growth. At present, the number of starving people is even rising again. The chart also illustrates that the most recent goals agreed by the global community in 2015, the UN Sustainable Development Goals, cannot realistically be achieved. Under current conditions, it is illusory to hope to defeat world hunger by 2030. This shows just how much competition for land area is already affecting people's well-being. To emphasize this: Every tenth human being is starving - today and on this earth! 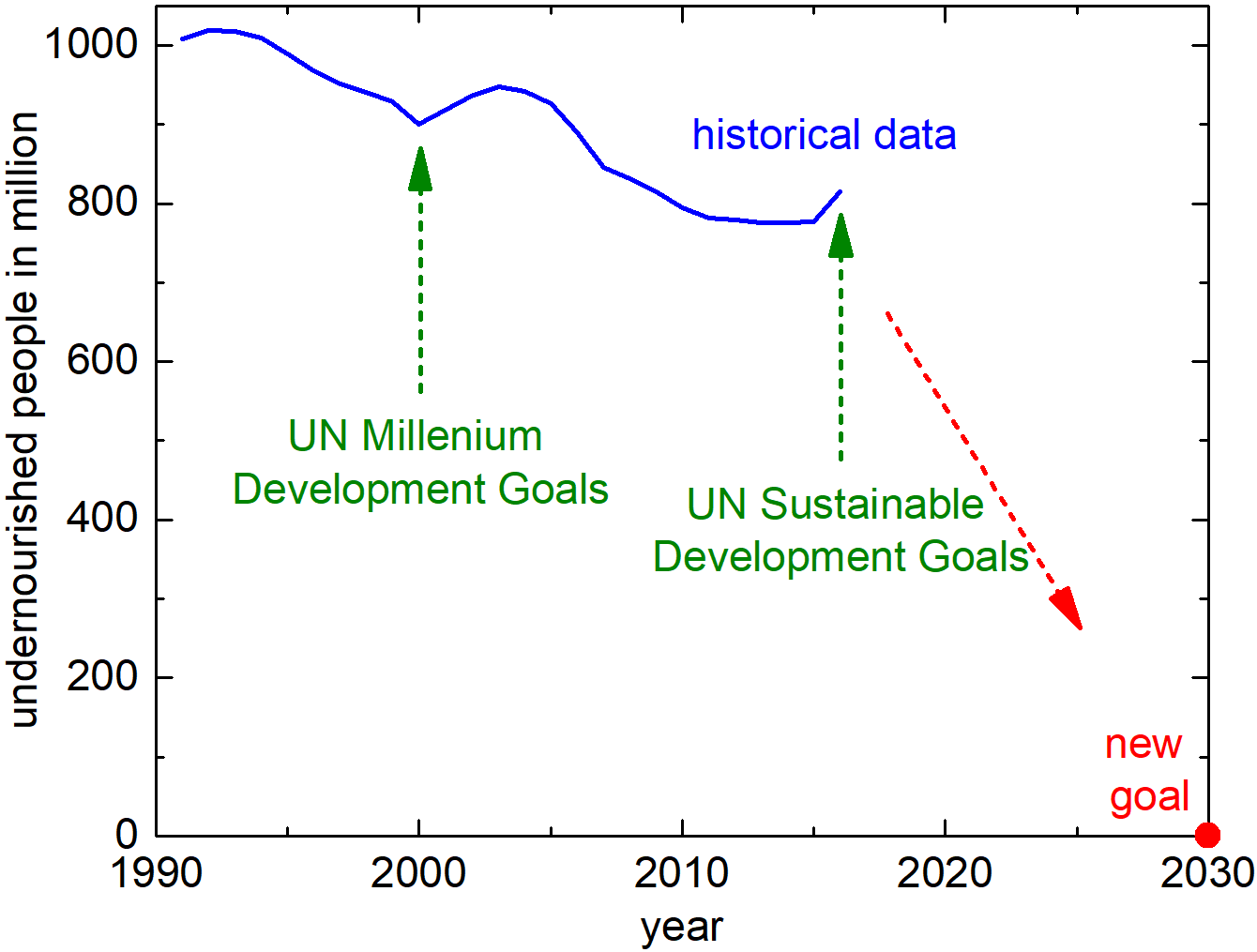 Scenarios were examined in order to illustrate the competition between different uses for the land area that can in principle be used for agriculture. The developments of the past were meaningfully further evolved into the future, as shown in Figures 2 to 5. These trends were obtained by evaluating the FAOSTAT database of the UN (UN FAOSTAT database www.fao.org/faostat/en/). Figure 2 shows how calorie supply has continued to increase in the past. In the scenarios it is assumed that the historical development will continue into the future, so that at least on average the calorie supply will be sufficiently secured for all people in a few years. Assuming that the currently much-discussed losses are further minimized and the distribution of food optimized, it should be possible to provide sufficient nutrition for all people by the middle of the century at the latest. 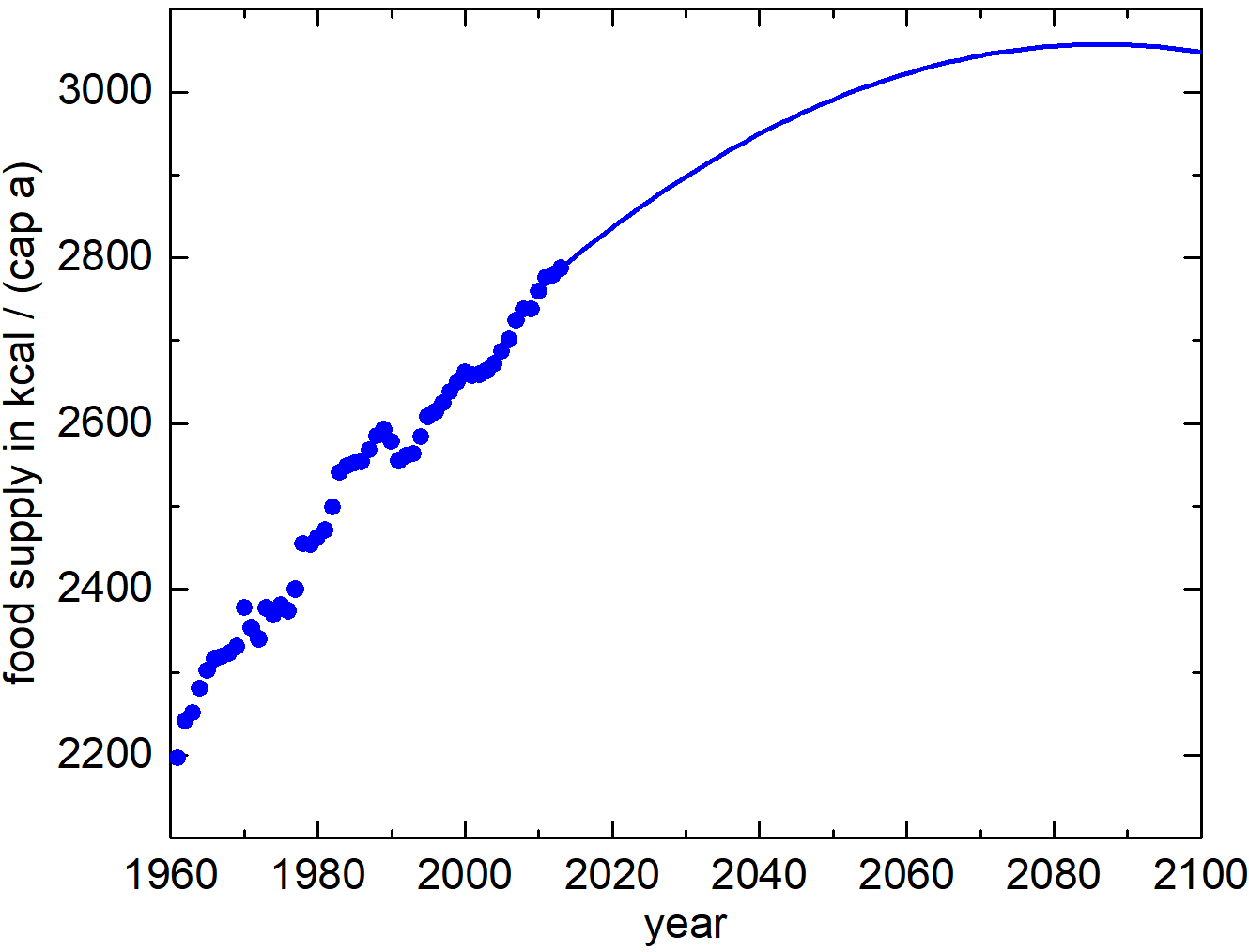 Figure 2: Development of caloric food supply per capita on global average: historical data and assumptions for the scenarios

Figure 3 shows how agricultural productivity on arable land has developed in the past. The development for the global average of all agriculturally grown products is shown in red. In addition, the same evaluation was carried out for the seven major crops, i.e. barley, maize, oil palm, rice, soybeans, wheat and sugar cane, which is shown in blue. Finally, in green the productivity is shown for all other products. Since the latter also includes lettuce and all vegetables, productivity per area is the lowest, as expected. It is noticeable that in particular for the seven main crops the historical data lie almost exactly on a straight line. For this reason, productivity has also been extrapolated into the future with a straight line. The slight bend in the red curve coincides with an increase in animal-based food production and may be due to a slight shift in the proportion of feed to other crops in recent years. The dashed lines show the further development, whereby in the scenarios only the total productivity, that is the red straight line, was considered. It is assumed in the scenarios that, despite climate change, agricultural productivity on arable land will continue to rise as in the past. 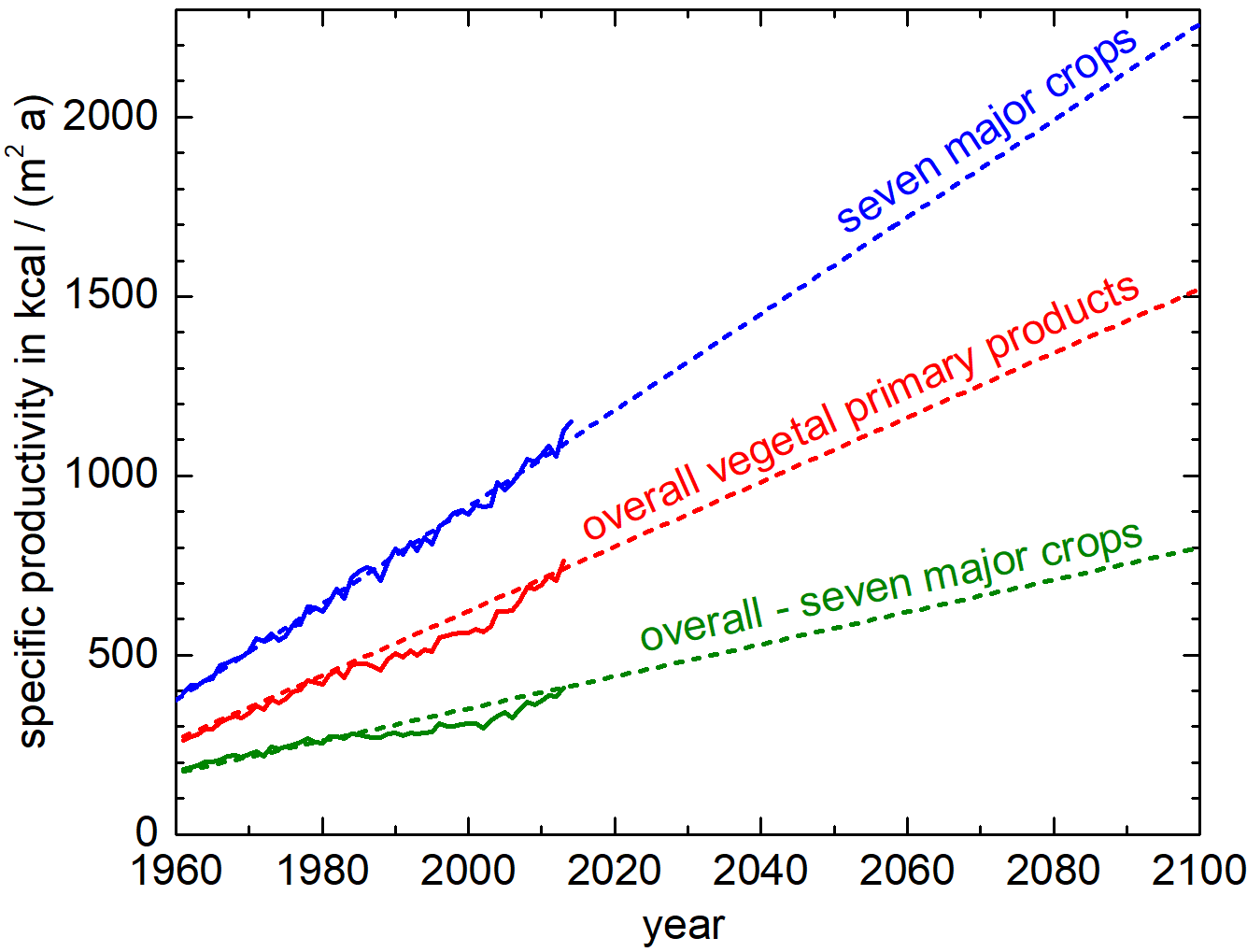 Figure 4 shows agricultural productivity for animal-based food. Vertically, the global average area used for meadows and pastures is shown, horizontally the ratio of feed calories to animal-based food calories. At first glance, it may seem surprising that today, on a global average, only 2 calories of feed per calorie of animal-based food have to be used. This is due to the fact that about half of the animal-based food products are dairy products and eggs, while the media often discuss the corresponding much higher figures for the exclusive utilization of animal meat alone. For the overall calorie supply in animal production also the grass and hey from the pastures would need to be included. The historical development is represented by the colored curve, where the colors characterize the years according to the inf´dicated scale. For the future scenarios a development according to the black curve was assumed, where the lower end is reached in 2100. The intensity of animal-based agriculture in terms of pasture area is then equal to the European average. This assumption takes into account that we know that an intensification to values of Germany is already no longer sustainable because it leads to problems with too much manure in some regions. The use of animal feed per animal-based product produced continues to decrease as shown. The value of 1.5 calories of feed per calorie of animal-based food has already been reached in some individual countries in the past, even for land intensive agriculture. 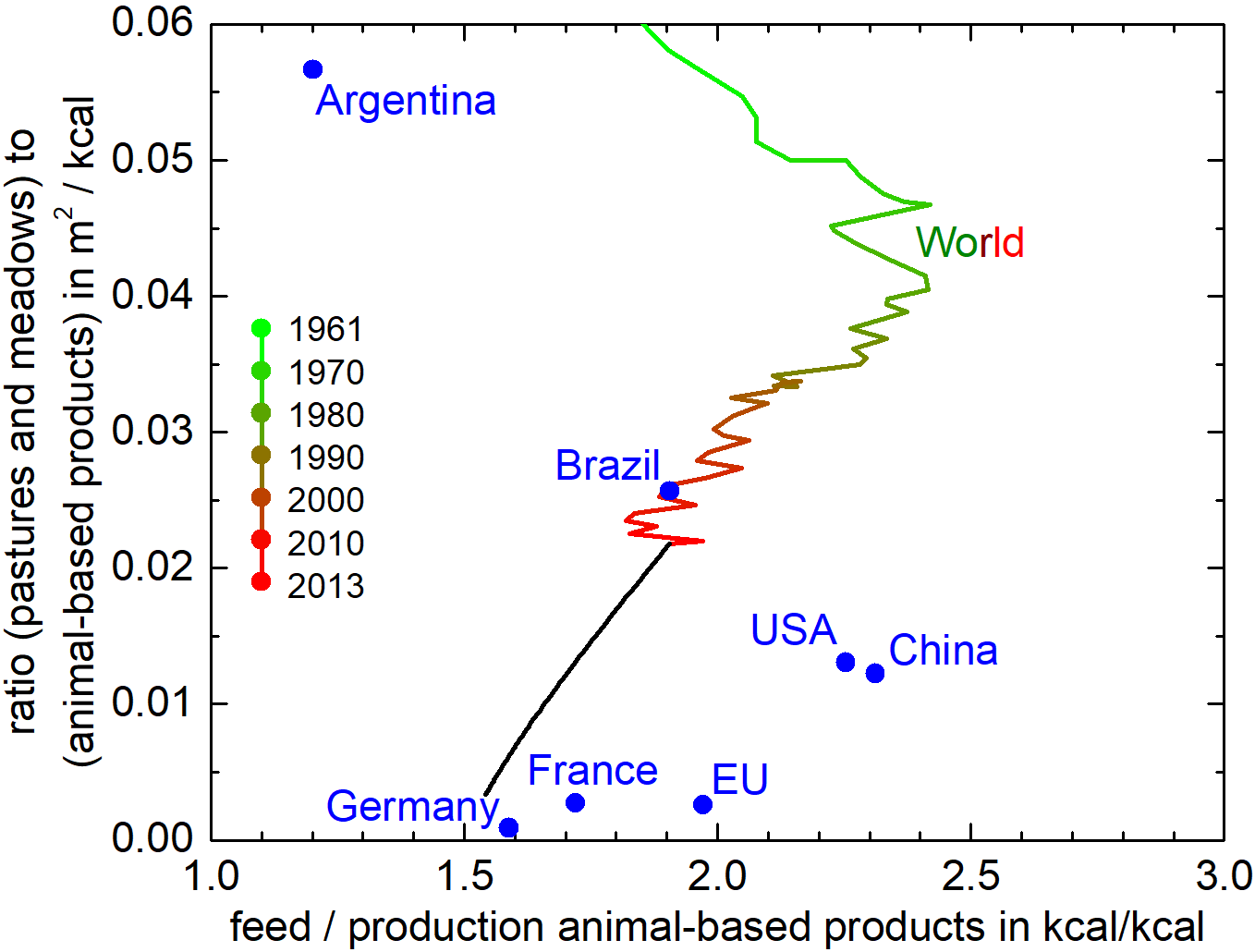 Figure 4: Historical data and assumptions for the scenarios of agricultural productivity for animal-based food

Figure 5 shows the fraction of animal-based calories supply. It is obvious that this value has been stable for several decades at around 16% before 2000 and then started to increase. This increase is mainly due to an increase in animal-based calories intake in China. In parallel this fraction started to slightly increase meanwhile also in India. This is compensated by a certain slight decrease in developed countries, where typical values lie between 0.25 and 0.35. For example in France roughly 35% of the consumed calories are animal based. For the future, a certain continuation of the increase is assumed, which is induced by the further development of less developed regions including an adaption to a more 'Western' lifestyle. This trend is nevertheless assumed to slow down and reach a maximum somewhere near the middle of the century. Currently the animal-based fraction of calories intake is 17.5% on global average. 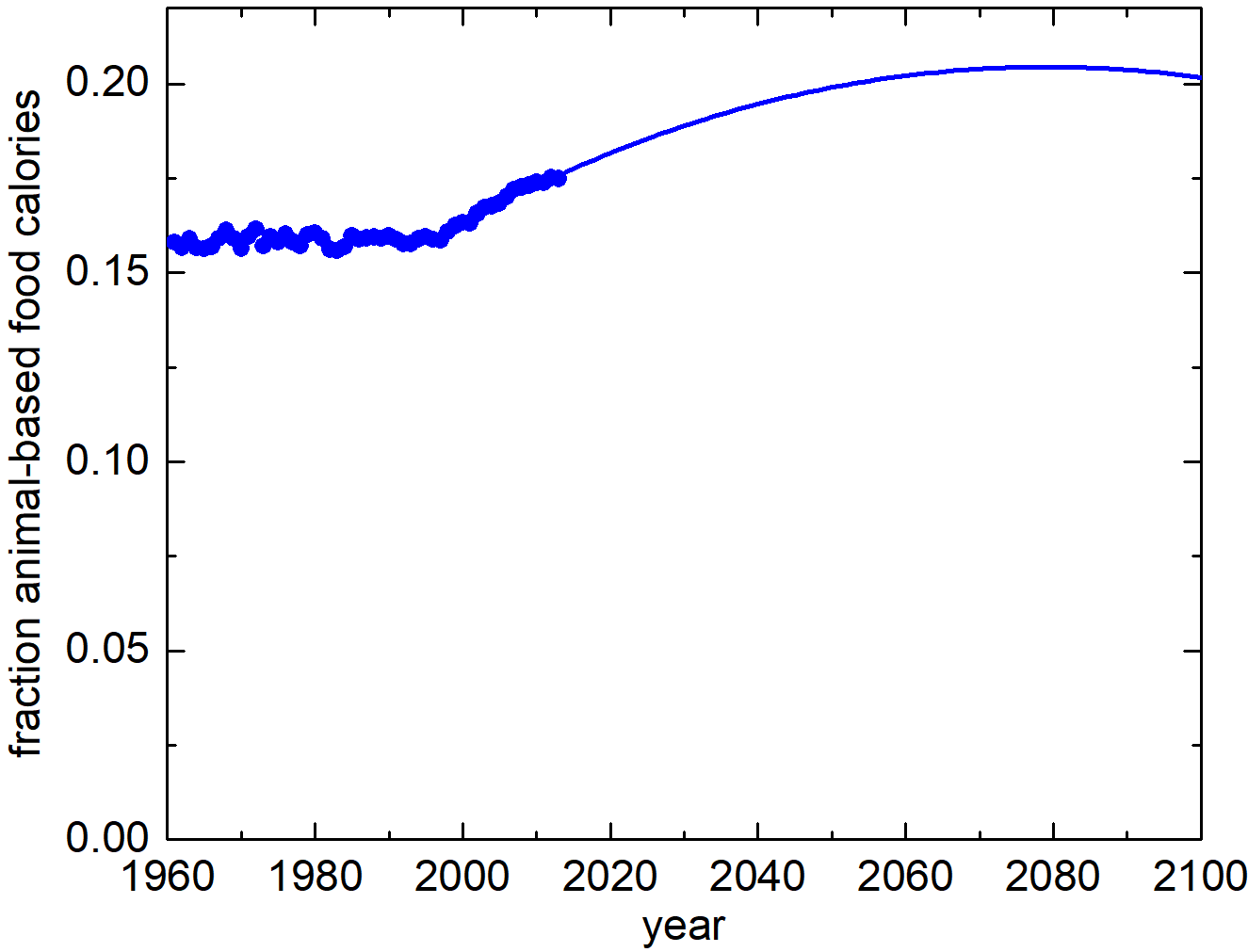 In Figures 6 to 8 different scenarios based on the projections shown above are presented. In Figure 6 a scenario based on the high population variant is presented. In the left part of the diagram the historical fractions of different land areas that can in principle be used agriculturally are shown. The right part shows the projections, where it is indicated from which utilization the land-area demand results. The white line shows the limit between forests and meadows & pasture, if only the population growth is accounted for. It is obvious that the overall available land area, which will be available per person, will drastically and continually be reducing in the future. If all human needs are to be fulfilled based on this land area, the intensity of agriculture would indeed need to continually be increased correspondingly. Since the area for pasture is reaching above the white line in the middle of the century, either forests need to be converted into agricultural land are, if hunger shall not increase, or more people will remain undernourished. An increase of agricultural productivity beyond what has been assumed can hardly be imagined. It can for example be shown that even genetically modified crops cannot increase productivity, because in the past decade the productivity for maize has been developing essentially identically in the USA and Germany, where in the USA during that decade more than 80% of the maize had been genetically modified, which until now is forbidden for crops in Germany. 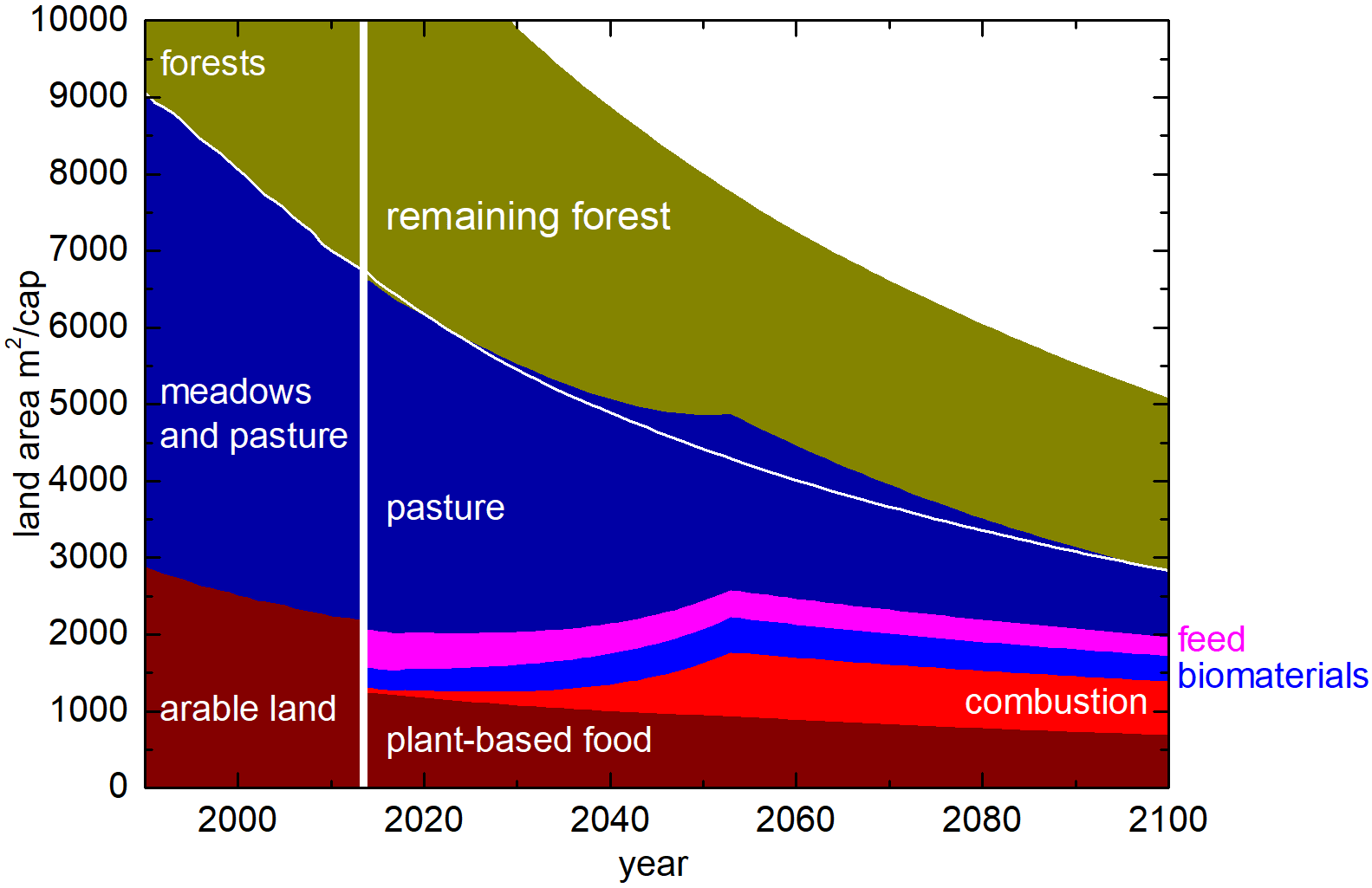 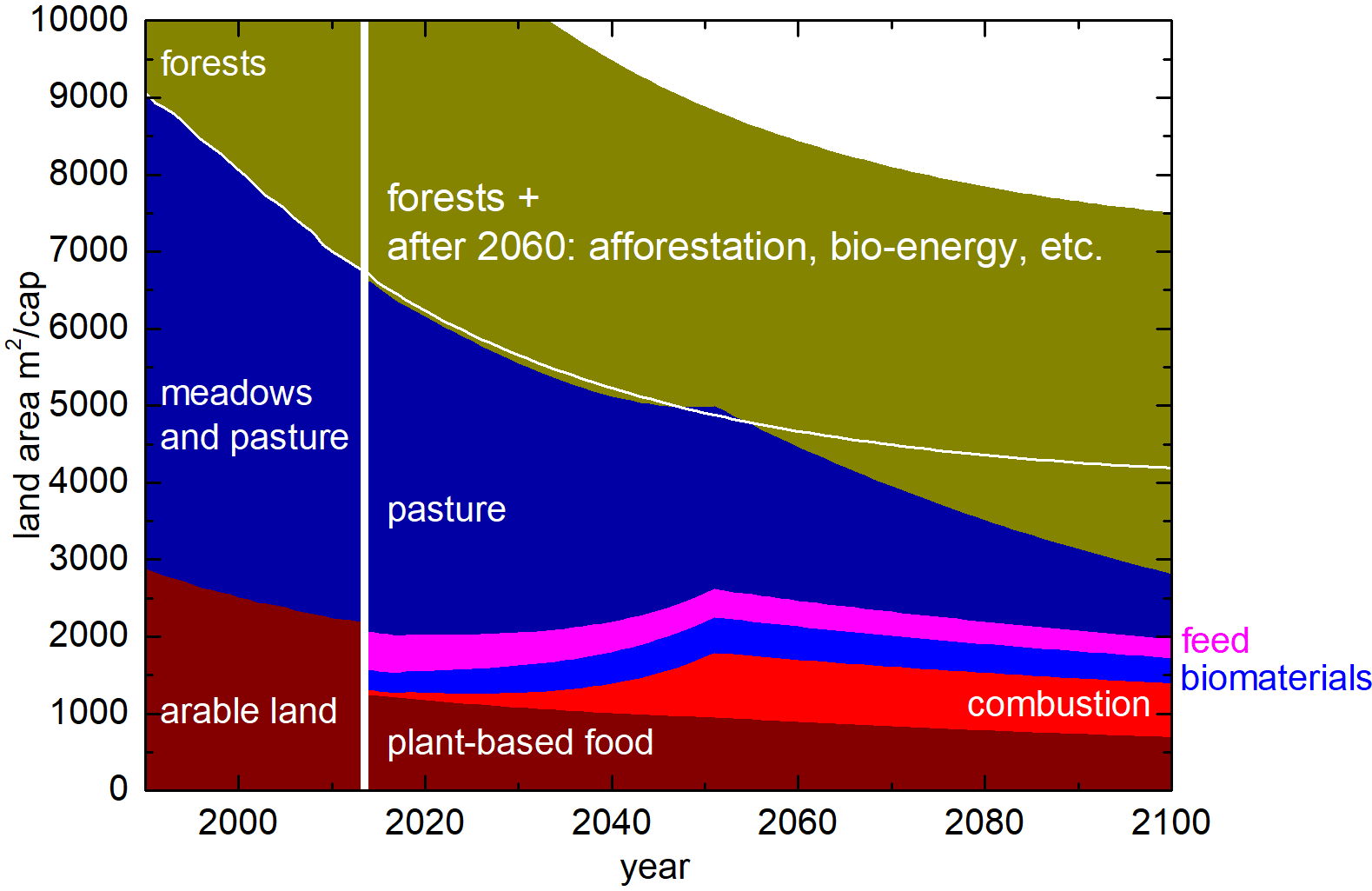 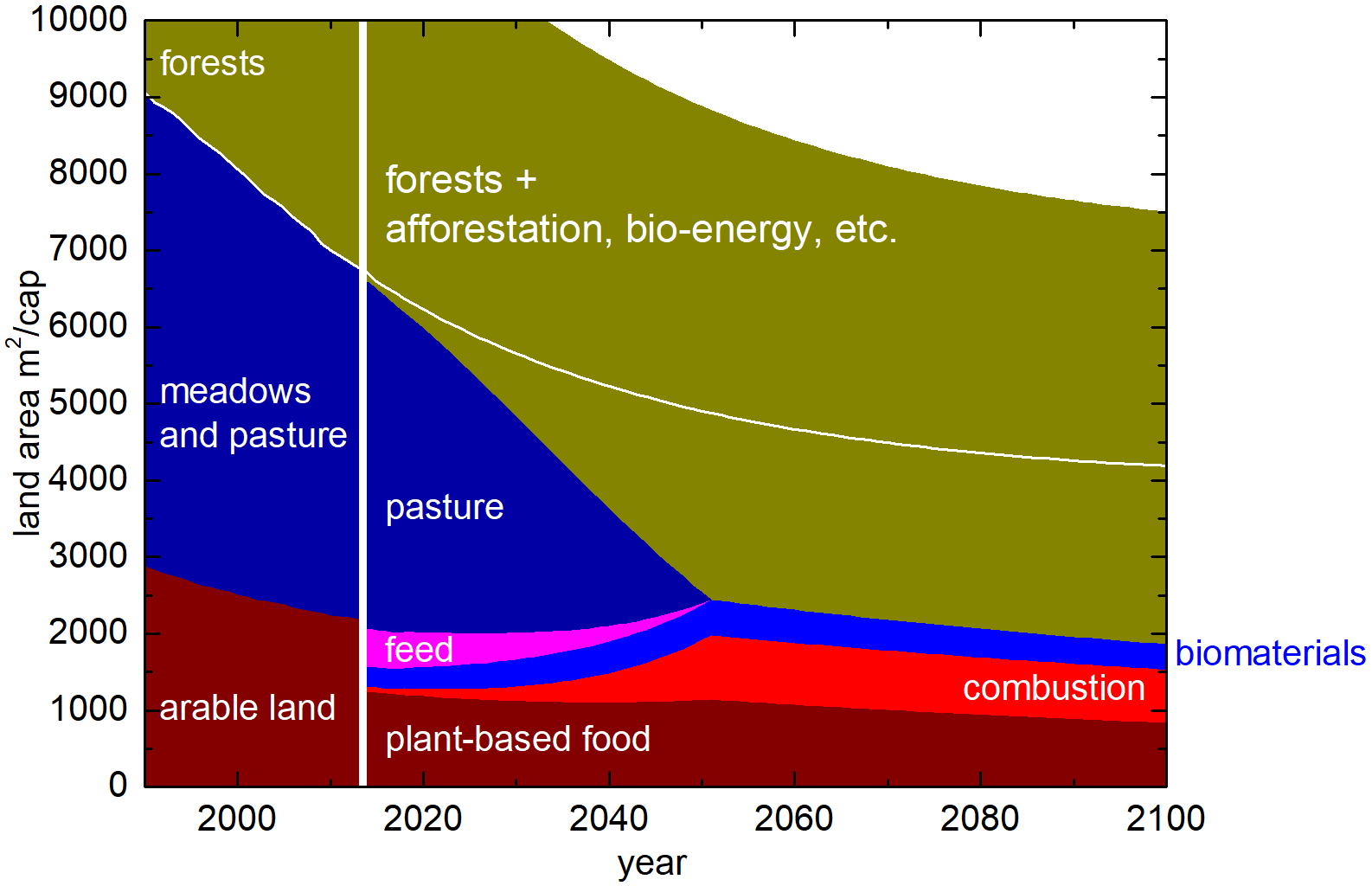 Figure 7 shows the same representation but assuming the medium variant of population growth. It can be seen that until around 2060 the agricultural productivity would still need to be developing at the highest limit assumed. Only after that the situation relaxes and some land area would become available for other uses like using more bio-energy or afforestation and renaturation to preserve bio-diversity.

In the scenario shown in Figure 8 it has additionally been assumed that parallel to the sustainable energy transition also the nutrition is shifted to fully plant-based. In this scenario it can be seen that instantaneously land area would be freed that could be used for enhancing sustainability. Only in this last scenario agriculture would thus not need to be intensified at utmost rate to ensure sufficient food supply for everyone.

For these scenarios, the individual assumptions can of course be debated. Some variations have been tested and it turns out that they typically don't change the general behavior but rather slightly shift the timescales at which limits are exceeded. Since the three scenarios shown here are based on identical assumptions, a comparison between them allows direct and clear statements independent of the individual assumptions. The following two statements can be deduced:

Comparing these two statements it becomes obvious that for eradicating world hunger the major driver is human behavior and not technology. At the same time it has to be stressed that there is no other lever that has only nearly as strong an influence as the behavior changes with respect to number of children and preference for plant-based food.

Since such a change in behavior is not foreseeable, it has to be clear that any non-food utilization of agricultural land area is increasing world hunger today and in the future. Thus, on the one hand, fostering bio-energy today is ethically questionable. This is especially so, because it can be shown that solely ustilizing side-streams from food production, so-called third-generation biomass, is not sufficient to fulfill the needs for bio-combustibles and bio-based materials. On the other hand it has to be realized that many scenarios for the sustainable energy transition build on extended utilization of bio-energy as well as on so-called negative-emission technologies, where effectively carbon dioxide is captured from the atmosphere and stored. Two prominent technologies are afforestation and reforestation, frequently abbreviated as AR, as well as bio-energy with carbon capture and storage, or for short BECCS. Both technologies require agricultural land area, which simply will not be available, if trends continue as in the past. In those studies, the negative-emission technologies can only be sustainably applied, because the studies assume much to low population growth as is shown in the corresponding dedicated discussion.

In a sustainable environment also the materials, which are today produced by chemical industry need to be supplied from non-fossil resources. One option are bio-based products like plastics, detergents, pharmaceuticals, etc. Of course arguments identical to those for bio-energy apply also for this use of agricultural land. Any form of bio-economy has to be ethically questioned as long as human behavior with respect to number of children and plant-based nutrition remains unchanged. This is discussed in more detail under the corresponding headline.